Timber can be a green, sustainable product, but illegal logging, fuelled by China’s insatiable appetite for timber, is precipitating environmental and economic disasters across the world.

A recent report, for example, revealed that a flabbergasting 93% of Mozambique’s logging is illegal (and largely unsustainable), destroying the country’s forest resources and costing around $146m in lost tax revenues since 2007. Lest we forget, Mozambique is the second least-developed country in the world. 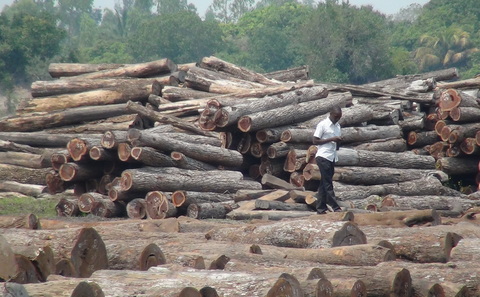 It is a similar story in Guinea-Bissau, another poor African country. Here over-logging is driven by the craze in China for Guinea-Bissau’s red African rosewood, which is often carved into luxury hongmu furniture reminiscent of the Qing and Ming dynasty period. The swelling demand from China’s emergent middle classes is threatening the very existence of rosewood: according to Constantino Correia, the former director of Guinea-Bissau’s forest-management agency, ‘we risk not having [African rosewood] in the coming years’.

These are not isolated incidents. A growing body of academic research and a large number of NGOs, including WWF and Global Witness, testify to a massive illegal trading links between Chinese ports and Burma, Brazil, Russia, Thailand, Indonesia, Vietnam, Belize and countries across central Africa.

In fact, forest products from Africa alone account for about 4% of China’s total imports – that’s staggering given the size of China and the massive amount it imports. Kofi Annan, former UN Secretary-General, claims Africa is losing $17bn every year in tax money due to illegal logging.

As is usually the case, it is the world’s poorest who suffer the most. Indigent communities forced to sell off their forests at a reckless, unsustainable pace are often paid a pittance for destroying their homelands. The WWF give the example of a small community in Papua Province, Indonesia, who earn $11 for a cubic meter of hardwood that is later sold to Chinese manufacturers for $240. These Chinese manufacturers will then likely sell their illegal-wood products for a significant profit, making the final markup even more exorbitant. 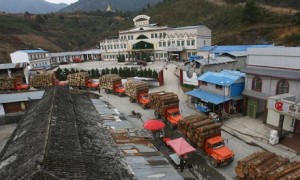 China is by far the leading importer of timber products in the world, with its own forests only able to provide for 40% of its needs. The Chinese government’s attempts to address this deficit by spending a massive $31bn on reforestation between 1999-2009 has had little effect, as demand continues to grow exponentially. In fact, if anything, the situation is getting worse. China imported more illegal wood in 2011 than it did in any previous year, importing 180m cubic meters of timber, up 300% from 2000.

China has signed no real commitments to stop importing illegal timber, barring an unenforced bilateral agreement with the US, Europe, Indonesia and Burma. Meanwhile, although the US, EU and Australia have implemented legislation banning the import of illegal timber, there is no such legislation stopping the import of products made from illegal timber. This makes the US seem particularly hypocritical: in 2006 it was estimated that Americans spent $3.5bn on illegal wood-based products – mostly furniture – which is roughly 200 times more than the money allocated by the US government to stop illegal logging.